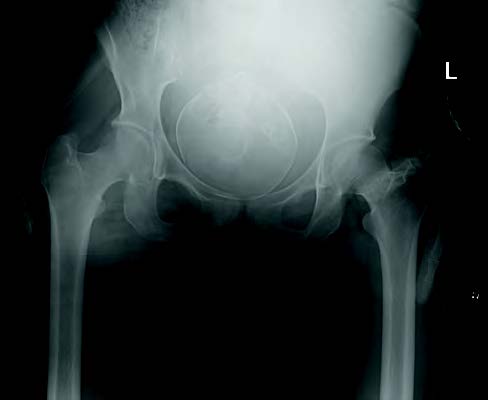 Pelvic fractures resulting from blunt traumatic injury are often associated with significant hemorrhage. Early identification and intervention can be lifesaving.

The most common mechanism of pelvic fractures is fall from standing causing lateral compression through the greater trochanter or iliac crest. Given the low-energy mechanism, these injuries are rarely life-threatening but may cause significant morbidity in elderly patients with multiple medical comorbidities and change in mobility after injury.

High-energy pelvic fractures can arise from lateral compression (LC), anteroposterior compression (APC), or vertical shear (VS) depending on the mechanism of injury. Fall from heights, crush injuries, and ballistic open fractures are particularly of concern in military-associated trauma. Given the high-energy mechanisms, these fractures are often more displaced and associated with concomitant injuries and significant hemorrhage.

Most bleeding associated with pelvic fractures is venous (either from the bony ends of the fracture itself or from the disrupted veins of the presacral venous plexus), although arterial injury can also occur with particular injury patterns. Lateral compression injuries may cause anterior bleeding from the obturator artery and corona mortis and the presacral pelvic venous plexus.

Initial evaluation of the trauma patient should follow the Advanced Trauma Life Support (ATLS) algorithm and begin with a primary survey including assessment of the airway, breathing, circulation, disability, and exposure.

Hypotension in trauma patients should raise suspicion for significant bleeding with loss of 30% of circulating blood volume. An anterior-posterior (AP) pelvic radiograph and focused assessment with sonography in trauma (FAST) should be performed as adjuncts to the primary survey.

Associated injuries may be identified during secondary survey. These include lower limb deformity or asymmetry, bruising and subcutaneous swelling of the pelvis and thighs, rectal or genitourinary bleeding, and open wounds of the perineum. In patients with suspected pelvic fractures, physical examination should include circumferential inspection and gentle palpation of the pelvis, with complete neurovascular examination of the bilateral lower extremities including assessment of rectal tone and perianal sensation. Digital rectal exam and speculum exam of the vagina should be performed to evaluate for open pelvic fractures.

Significant difference in leg lengths may denote a vertical shear injury of the pelvis. CT of the abdomen and pelvis may be used as an adjunct to the secondary survey in patients who are hemodynamically stable.

Anteroposterior pelvic radiograph should be obtained along with chest radiograph as an adjunct to the primary survey. During the primary survey, one assesses for major pelvic fracture including diastasis of the pubic symphysis, disruption of the sacroiliac joint, or vertical asymmetry of the hemipelvis segments.

Soft tissue shadowing or bladder displacement may suggest associated hematoma. After hemodynamic stabilization of the patient and completion of the primary surgery, additional radiographs including inlet and outlet views and CT scan of the pelvis may be obtained for better visualization and classification of identified injuries.

CT of the abdomen and pelvis with intravenous contrast in hemodynamically stable patients may demonstrate smaller bleeds. However, FAST is specific enough for intraperitoneal bleeding that hemodynamically unstable patients with pelvic fractures and positive FAST should undergo emergent exploratory laparotomy with concurrent pelvic stabilization and preperitoneal pelvic packing.

CT of the abdomen and pelvis with IV contrast can confirm the suspected diagnosis of pelvic fracture and provide additional anatomic information about injury burden. In addition, CT can identify the present of active arterial contrast extravasation suggesting need for pelvic angiogram with possible embolization.

The Young-Burgess classification (Figure 1) is commonly used to describe the mechanism of injury and resultant injury pattern seen in patients presenting with pelvic fractures. Patients may also present with a combination of injury patterns.

Anteroposterior compression (APC) injuries are characterized by symphyseal diastasis with or without anterior vertical fracture.

APC1 fractures have minimal symphyseal diastasis and do not require surgery.

APC2 fractures have symphyseal diastasis greater than 2.5 cm along with widening of the sacroiliac joint, but with intact posterior sacroiliac ligaments.

APC3 fractures have complete disruption of anterior and posterior sacroiliac joints leaving to mechanical instability of the pelvis. These injuries are often associated with significant pelvic bleeding.

Lateral compression (LC) injuries are characterized by anterior transverse fractures of the pubic rami. LC1 fractures most often occur after fall from standing in elderly patients, causing fractures through the sacral foramen or ala with corresponding anterior fractures of the pubic rami. LC1 fractures are typically mechanically stable and do not require surgical intervention; when seen in young patients with healthy bone, however, they are typically associated with higher impact mechanisms of injury and can present with greater displacement and instability.

LC2 fractures have an additional crescent or iliac wing fracture in the posterior pelvis. LC3 fractures are known as “wind-swept” pelvis, with fracture-dislocations causing internal rotation of one hemipelvis and external rotation of the contralateral hemipelvis. These injuries present with the greatest mechanical instability and pelvic hemorrhage and require immediate intervention with pelvic binder placement.

Patients presenting with VS fractures and pelvic hemorrhage should be managed with skeletal traction and pelvic binder placement.

Significant hemorrhage from pelvic fractures should be identified during the primary and secondary trauma survey. Adequate intravenous access for resuscitation should be obtained and blood products utilized as needed.

Patients with open pelvic fractures should receive antibiotics within 30 minutes with gram-positive coverage. Patients with injuries communicating with the bowel should also receive coverage for enteric gram-negative flora.

Pelvic bleeding is typically venous in etiology and can be controlled in a temporizing nature with application of a pelvic binder to help stabilize the pelvic ring, minimize bleeding fracture edges, and decrease functional pelvic volume to help tamponade venous bleeding.

Importantly, concomitant large open wounds in the perineum or lumbopelvic area should be quickly irrigated and pressure dressing applied. In addition, placement of a strap around the ankle with gentle adduction and internal rotation of the feet prevents tendency for the legs to fall in to a “frog-leg position” and optimizes positioning for the pelvic binder.

There are commercial pelvic binders available, but simple bed sheets can also be used with good effect when resources are limited. Of note, pneumatic antishock garments were previously used to stabilize the pelvis but are no longer used as the bulky design often interfered with physical examination and was thought to contribute to abdominal compartment syndrome in some cases without reliable reduction in hemorrhage.

A commercial pelvic binder can be reliably applied by one person. Given the significant pressure applied, the binder should be roughly 20 cm wide with a smooth surface to protect the underlying skin. The pelvic binder can be left in place as needed, but it is imperative that as long as the binder is left in place, the underlying skin should be regularly checked to assess for pressure injuries, particularly over bony prominences. If removal of the pelvic binder causes worsening tachycardia or hypotension, it can be reapplied but should be shifted slightly to help prevent skin necrosis.

Extremity traction, whether with placement of skeletal traction pins or, in limited resource situations, with manual skin traction or Thomas splints, should be applied in situations of vertical displacement of a hemipelvis.

Patients with unstable pelvis fractures should be considered for external fixation in the operating room. Supra-acetabular or Hanover type pelvic external fixators require only one pin per hemipelvis but must be placed under fluoroscopic guidance. Iliac crest pelvic external fixators require two pins per hemipelvis but may be placed without fluoroscopic guidance. In cases of mainly posterior widening, a pelvic C-clamp can be placed into the lateral cortex of the ilium using bony anatomic landmarks.

External fixation can be replaced by open reduction and internal fixation (ORIF) once the patient is resuscitated and stable and if resources permit. In certain fracture patterns and in patients with significant concomitant thoracic or abdominal injuries, history of prior surgery or radiation complicating an open approach, or concern for gross contamination or open fracture, external fixation may serve as definitive fixation and is generally left in place for a minimum of 12 weeks.

Preperitoneal pelvic packing should be considered in patients who remain persistently hemodynamically unstable despite pelvic binder and/or external fixation. It is preferred over angioembolization because of faster time to intervention and because it can address both venous and bone bleeding in addition to arterial bleeding. Pelvic packing can also be performed at time of exploratory laparotomy and should be performed right after stabilization of the pelvis with external fixation.

To perform preperitoneal pelvic packing, a suprapubic limited Pfannenstiel incision can be made separate to any laparotomy incision. Care is taken to avoid injury to the bladder and the true pelvis is entered without violation of the peritoneum.

Packing is typically removed in 24 to 48 hours after resuscitation and correction of coagulopathy. Of note, the pelvis must be stabilized with external fixation prior to pelvic packing to achieve effective tamponade. Pelvic packing is associated with risk of infection due to the presence of foreign bodies, with increased risk with repeated packing; packs should therefore only remain in place until active bleeding has resolved, coagulopathy has been corrected, and the patient has been adequately resuscitated.

In patients with persistent bleeding after pelvic packing without an obvious alternative source, angiography should be considered.

Empiric bilateral internal iliac artery embolization is not recommended due to reports of increased risk of sexual impotence and gluteal ischemia leading to claudication and tissue necrosis. However, recent studies suggest no difference in outcomes and attribute cases of gluteal necrosis to pressure injury in the setting of persistent global hypotension.

Patients with severe retroperitoneal bleeding from pelvic fractures are at increased risk for abdominal compartment syndrome because of the volume effect of retroperitoneal hemorrhage and fluid shifts associated with aggressive resuscitation. As a result, these patients should be carefully monitored for signs of abdominal compartment syndrome and may require decompressive laparotomy with temporary abdominal closure.

Patients with severe pelvic fractures are at increased risk of developing deep vein thromboses due to immobility and impaired venous blood flow in the pelvis and lower extremities. Unless contraindicated, patients should receive both mechanical and pharmacologic DVT prophylaxis. Patients with injuries precluding anticoagulation may be considered for IVC filter.

Despite the interventions described above, mortality for patients presenting with severe pelvic fractures and shock remains as high as 30% and is best predicted by the Injury Severity Score. Early mortality is predominantly due to hemorrhage, while late mortality is due to associated injuries or multisystem organ failure. The high overall mortality rate largely reflects the significant trauma burden associated with mechanisms of injury responsible for severe pelvic fractures. Tracheostomy is a procedure used to support patients with obstruction of their airway at the level of the larynx or [...] 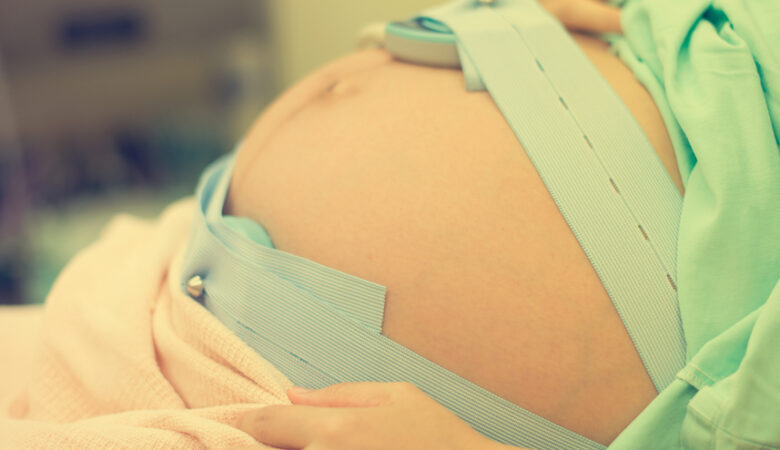 Trauma Considerations for the Pregnant Patient

Trauma affects up to 10% of pregnancies and is the leading cause of nonobstetric maternal death. Major trauma [...] Trauma to the genitourinary system usually occurs as part of a multisystem trauma rather than as an isolated [...] Crush injury is caused by the static compression of body parts causing localized damage to skeletal muscle and [...] 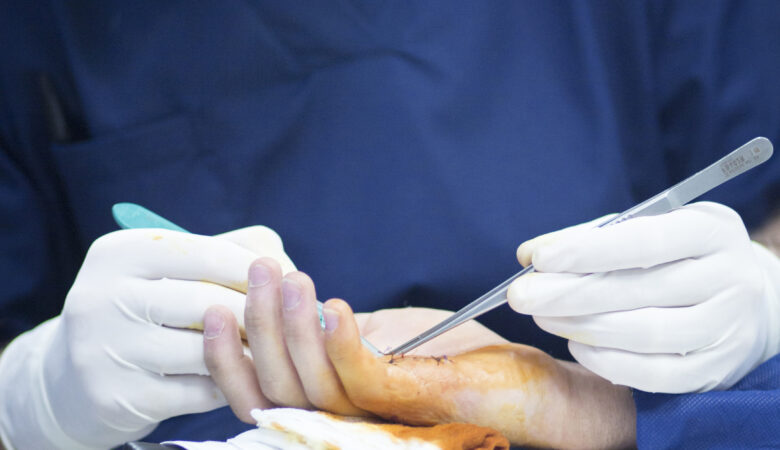